-----
Overvalued and Generally Evil, Clear Channel is in Trouble....

(next to Fox, the biggest media backer of the Bush regime)

SAN ANTONIO (AP) -- Clear Channel Communications Inc. and the private equity firms seeking to close a $19.5 billion purchase of the company on Wednesday sued the banks backing the deal.

In lawsuits filed in Texas and New York, Clear Channel and the buyers group, led by Bain Capital and Thomas H. Lee Partners LLC, claimed the six banks that promised to finance the deal were reneging on the agreement to provide long-term financing, looking to offer little more than a short-term bridge loan.

"The lenders agreed to provide long-term financing," said Alex Stanton, a Bain spokesman. "They now have lenders' remorse because the credit markets have been difficult."
The lenders, which include Citigroup Inc., Morgan Stanley, Credit Suisse Group, The Royal Bank of Scotland, Deutsche Bank AG and Wachovia Corp., signed commitments when the deal was inked 18 months ago saying they would bear all the risk in changes to the debt market.

In that time, it has become more difficult for the banks to resell the loans so -- instead of sticking with the minimum six years of financing -- the lenders had sought to provide only a short-term loan, the equity firms and Clear Channel complained.

The firms contend the banks are trying to kill the deal by putting unreasonable terms on the loan.

"The behavior of these banks is irresponsible, unprofessional and unjustified. The defendants have made clear that they are determined, by any means possible, to destroy the merger and thus avoid their obligation to fund, as they are required legally to do," said Clear Channel CEO Mark Mays in a statement.

The banks issued a statement denying they failed to make good on their earlier commitment.
"The bank group presented the sponsors with credit agreements fully consistent and compliant with the commitment letter," said the statement issued by Citigroup on behalf of the lending consortium. "We believe the suits are without merit and will contest them vigorously."
Clear Channel shares have been volatile for months. Shares fell $5.64, or more than 17 percent, to $26.92 Wednesday, the day after reports surfaced that the deal was on the brink of collapse. Following the lawsuits, the share price climbed $2.43, or 9 percent, to $29.35 in after-hours trading.

But the share price remains anemic compared with the $39.20 the equity firms agreed to pay for the company. The equity firms say they remain committed to closing the deal. If they don't, they face an estimated $500 million to $600 million in breakup fees.

The deal was scheduled to close by Monday. Failure to close on time opens the parties up to fees and other potential problems.

SMH Capital analyst David Miller said banks that were gladly loaning money for ever bigger leveraged buyouts just a year ago are now concerned about whether the company can generate enough free cash flow to cover the interest payments in a miserly credit market.

The banks are looking at a $3 billion to $4 billion write-down on the loan, so there's obvious incentive for lenders to seek a way to renegotiate or pull out.

Clear Channel has had success before in forcing a deal through legal action. The $1.1 billion sale of its television group closed after the company lowered the price by $100 million and sued Providence Equity Partners, which had been having difficulty getting Wachovia to make good on its earlier financing commitment.

Clear Channel is the nation's largest operator of radio stations, a business that has been stagnant for years as digital music players and satellite radio have siphoned off listeners and advertising dollars.

The company now generates more than half of its revenue from its billboard business, consisting of roughly 800,000 signs worldwide, and that business has been growing as advertisers have shifted spending away from other avenues to billboards, which are harder for consumers to bypass.

Clear Channel Communications Inc. and the private equity firms seeking to close a $19.5 billion buyout of the company have sued their lenders.

The radio and billboard giant filed suit Wednesday in Texas, claiming the five banks who promised to finance the deal are reneging. The private buyers, led by Bain Capital and Thomas H. Lee Partners, also sued.

The banks signed letters backing the deal, but in the 18 months since it was first made, the credit market has gotten much tighter and Clear Channel's stock is now trading well below the $39.20 that the buyers committed to pay.

The private equity firms face an estimated $500 million to $600 million in breakup fees if the deal does not go through.

Shares of Clear Channel closed down 17% to $26.92 on Wednesday as shareholders grew pessimistic about whether the deal would go through.

The buyout was supposed to be completed by Monday.

Posted by Rex Frankel at 7:05 PM No comments: 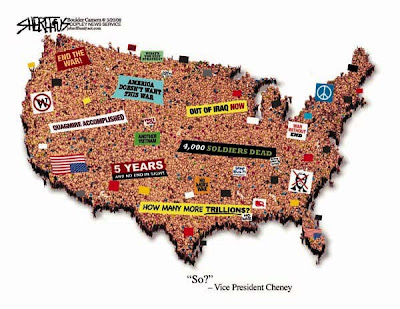