The Middle Class Fights Back? 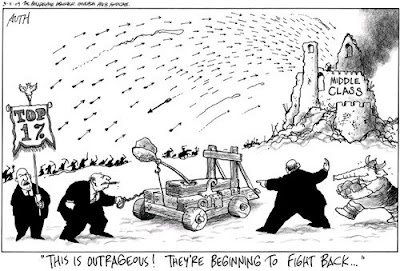 Posted by Rex Frankel at 1:01 PM No comments:

-
Which "Losers" Should the Government Bail Out?
"Do We want to subsidize the loser's mortgages?"--Rick Santelli, CNBC financial analyst

http://www.thedailyshow.com/video/index.jhtml?videoId=220252&title=cnbc-financial-advice
Posted by Rex Frankel at 10:58 PM No comments:

-
Concern over "class warfare" depends on which class you're in...
for full story, see http://www.latimes.com/business/personalfinance/la-fi-hiltzik4-2009mar04,0,1356927.column

by Michael Hiltzik
March 4, 2009 "Class warfare" comes in many flavors. There's the variety practiced by feudal overlords upon their serfs, and the variety waged by the Jacobins of the French Revolution against the monarchists.

Then there's the variety that Republicans claim to find in President Obama's proposed budget -- a taking from the rich to reward the undeserving poor. The rhetoric has spread quickly, moving from the libertarian Heritage Foundation to the ranks of GOP presidential hopefuls like flames leaping from tree to tree in the Angeles National Forest.

Yet the true class war of recent American history is the one that has pitted the upper 1% of income earners against almost everybody else. Over the last three decades, a period that spans Republican and Democratic administrations alike, average family income has scarcely budged an inch, while the wealthy have grown measurably wealthier.

Labels: rich-poor gap, The Unfairly Picked-On Super Rich?
-
In a bad economy, Oil companies still profit
from a 3/4/2009 letter to the editor, http://www.dailybreeze.com/letters/ci_11830754

A few weeks ago there was an article in the business pages that should have been on the front page of every newspaper in the country and the top story on every television news show. While the whole country was suffering a recession, including giant corporations like Microsoft, the ExxonMobil Corp. posted not only the highest profits in its history but the highest of any corporation in U.S. history: $45.2 billion. ExxonMobil made this money through outrageous price gouging, which caused the entire economy to suffer. That cost was added to the price of everything you buy, and it caused every business except the oil companies to suffer. The Republicans did everything possible to help them get away with this. When Congress tried to get records of the secret meetings between the Dick Cheney, administration officials and the oil companies, they were refused even when the records were subpoenaed. For that alone, Cheney should go to prison. The Bush administration gave them huge tax breaks, and when gas prices shot up to record levels and the economy went into recession, their answer was more tax breaks for the oil companies. The Republican Party works for these crooks and against ordinary people. They should all be removed from office. - MARK BEGOVICH
Posted by Rex Frankel at 12:48 PM No comments: