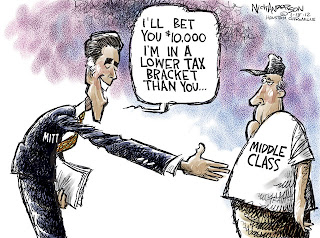 Even among his wealthy peers -- a cohort that particularly benefits from the lower capital gains rate -- Romney’s rate is below the average 18.5% effective tax rate paid by the richest 1%, according to the Tax Policy Center...
Posted by Rex Frankel at 11:07 AM No comments:

Romney "like(s) being able to fire people."
Other GOP contenders have a problem with that (not firing people, just telling the public that's what they want to do)
"Can't we get back to bashing Obama's pro-middle class policies?"

By Mike Littwin
The last thing anyone could have expected from the Republican presidential field here was a late-breaking shift to the left...

...Here's Gingrich, who has called Romney a looter, explaining to the press how a historian/not lobbyist sees the issue:
"Is capitalism really about the ability of a handful of rich people to manipulate the lives of thousands of other people and walk off with the money? Or is that, in fact ... a flawed system? So I do draw a distinction between looting a company, leaving behind broken families and broken neighborhoods and leaving behind a factory that should be there."

Rick Perry — who is polling at 1 percent in New Hampshire — is in South Carolina, where he's focusing on a company that he says was "looted" by Bain and adds that "getting rich off failure and sticking it to someone else is ... indefensible."

"If you're a victim of Bain Capital's downsizing," said Perry, who routinely calls Barack Obama a socialist, "it's the ultimate insult for Mitt Romney to come to South Carolina and tell you he feels your pain, because he caused it."

I know. You think the outrage may be forced — and a little late in the game. Everyone figured Romney's problem in the primaries would be Romneycare. But it turns out to be Bain Scare...
Posted by Rex Frankel at 10:02 AM No comments: