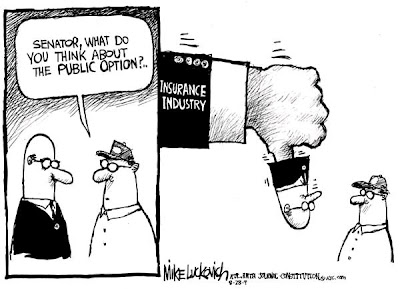 WASHINGTON – The judgment is harsh in a new poll that finds Americans worried about the government taking over health insurance, cutting off treatment to the elderly and giving coverage to illegal immigrants. Harsh, but not based on facts.

President Barack Obama's lack of a detailed plan for overhauling health care is letting critics fill in the blanks in the public's mind. In reality, Washington is not working on "death panels" or nationalization of health care.

To be sure, presenting Congress and the country with the nuts and bolts of a revamped system of health insurance is no guarantee of success for a president — just ask Bill and Hillary Rodham Clinton. Their famous flop was demonized, too. After all, the devil does lurk in details.
It can also lurk in generalities, it seems.
Obama is promoting his changes in something of a vacuum, laying out principles, goals and broad avenues, some of which he's open to amending. As lawmakers sweat the nitty gritty, he's doing a lot of listening, and he's getting an earful.
A new NBC News poll suggests some of the myths and partial truths about the plans under consideration are taking hold.
Most respondents said the effort is likely to lead to a "government takeover of the health care system" and to public insurance for illegal immigrants. Half said it will probably result in taxpayers paying for abortions and nearly that many expected the government will end up with the power to decide when treatment should stop for old people.

A look at each of those points:

THE POLL: 45 percent said it's likely the government will decide when to stop care for the elderly; 50 percent said it's not likely.
THE FACTS: Nothing being debated in Washington would give the government such authority. Critics have twisted a provision in a House bill that would direct Medicare to pay for counseling sessions about end-of-life care, living wills, hospices and the like if a patient wants such consultations with a doctor. They have said, incorrectly, that the elderly would be required to have these sessions.
House Republican Leader John Boehner of Ohio said such counseling "may start us down a treacherous path toward government-encouraged euthanasia."
The bill would prohibit coverage of counseling that presents suicide or assisted suicide as an option.
Republican Sen. Johnny Isakson of Georgia, who has been a proponent of coverage for end-of-life counseling under Medicare, said such sessions are a voluntary benefit, strictly between doctor and patient, and it was "nuts" to think death panels are looming or euthanasia is part of the equation.
But as fellow conservatives stepped up criticism of the provision, he backed away from his defense of it.
___
THE POLL: 55 percent expect the overhaul will give coverage to illegal immigrants; 34 percent don't.
THE FACTS: The proposals being negotiated do not provide coverage for illegal immigrants.
___

THE POLL: 54 percent said the overhaul will lead to a government takeover of health care; 39 percent disagree.
THE FACTS: Obama is not proposing a single-payer system in which the government covers everyone, like in Canada or some European countries. He says that direction is not right for the U.S. The proposals being negotiated do not go there.
At issue is a proposed "exchange" or "marketplace" in which a new government plan would be one option for people who aren't covered at work or whose job coverage is too expensive. The exchange would offer some private plans as well as the public one, all of them required to offer certain basic benefits.
That's a long way from a government takeover. But when Obama tells people they can just continue with the plans they have now if they are happy with them, that can't be taken at face value, either. Tax provisions could end up making it cheaper for some employers to pay a fee to end their health coverage, nudging some patients into a public plan with different doctors and benefits. Over time, critics fear, the public plan could squeeze private insurers out of business because they would not be able to compete with the federal government.
It's unclear now whether Obama is committed to the public option. He described it recently as "just one sliver" of health reform, suggesting it was expendable if lawmakers could agree on another way to expand affordable coverage. Now the White House is emphasizing his strong support for it.

___
THE POLL: 50 percent expect taxpayer dollars will be used to pay for abortions; 37 percent don't.
THE FACTS: The House version of legislation would allow coverage for abortion, but the bill says a beneficiary's own money — not taxpayer funds — must be used to pay for the procedure. How that would be enforced has not been determined.
Obama has stated that the U.S. should continue its tradition of "not financing abortions as part of government-funded health care." Current laws prohibiting public financing of abortion would stay on the books.
Yet abortion guidelines are not yet clear for the government-supervised insurance exchange. There is strong sentiment in Congress on both sides of the issue.
___
The poll of 805 people was taken Aug. 15-17 and has a margin of sampling error of plus or minus 3.5 percentage points.
Posted by Rex Frankel at 6:24 PM No comments: